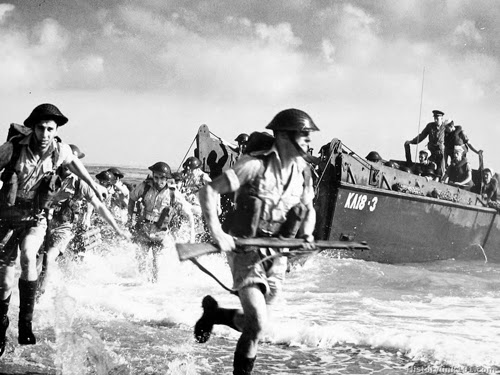 World War II produced many unusual stories and coincidences. Louis Goldman from Hove in England has a story to add to the collection.

The scene was set in a German prisoner of war camp in May, 1945. Mr Goldman was a prisoner in the camp, one of the walking wounded. He had been injured in the D-Day invasion, and was then captured and marched from a labour camp in Poland, through Czechoslovakia to another camp near Nuernberg. Towards the end of the war an American unit moved in and took over.

Goldman was in a weak physical condition but was excited at the thought of release. He asked one of the American soldiers if, by chance, any of them were from Toledo, USA - his sister had moved there.

He was introduced to a Captain Bernard Shuer who took his name and details. .

Mr Goldman was flown home to England for a reunion with his family and for medical treatment, so he didn't think any more about Captain Shuer.

About ten years later, however, he heard from his sister, Sylvia Ziegler, in the USA, who had been seriously ill which required surgery. She told Goldman her life was saved by a fine physician - a Dr Bernard Shuer. Yes, the very same man who helped free her brother!

Mr Goldman made a visit to the USA and met Shuer, along with his sister, and they talked together of their war experiences.

Footnote: Going back to World War II Goldman was listed as being 'killed in action' during the D-Day invasion and his family even received condolences from the British government. His name was entered on his school's honour roll for men killed in action. Strangest of all though, is that he has a grave in France marked for him, where another unidentified soldier is buried.

Other World War II Posts:
Coincidence During the Battle for Crete World War 2
The Torturer Is Forgiven As The Hating Has To Stop
Making Fun And The Mocking Of Adolf Hitler