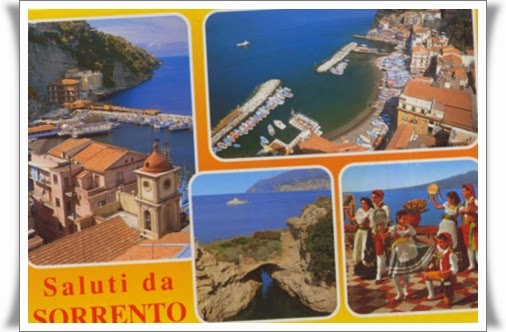 It's funny how many people have a coincidence story of some sort to tell. We were out walking and met a man we often see and got into conversation. I'm not sure how we got to the subject but Karin mentioned to him that I write about coincidences. "Ah," he said, "I've got a coincidence story." This is what he went on to tell us.

About twenty years ago he had a girlfriend and for some reason she wanted to go off to Italy for several months. This was, of course, at a time when communication wasn't like it is today. There were no emails, texts etc.

She said she would keep in touch, by what we now call snail mail, plus she had his home telephone number - a land-line.

He received a few postcards from her, but as she was moving about he couldn't contact her. Out of the blue he then had the opportunity of better employment, but this meant he had to move away from his rented flat and therefore change his phone number.

It seemed to be the end of the relationship. Then he remembered that he'd also given her his previous employers phone number as well, in case of emergencies. Perhaps she would try to contact him there.

He rang his previous employer and explained to the woman on reception what had happened. The receptionist told him to hang on the line as there was another incoming call.

The incoming call just happened to be from his girlfriend trying to contact him!

So were they meant to be together, and was this the start of a lifetime romance? No, despite them making contact again and her finally returning from Italy the relationship floundered.

An interesting enough coincidence but was is synchronicity? Well it was meaningful at the time it happened so it must have been. It does seem as if there are many degrees of synchronicity.

Other Recent Posts:
Robin Hood And The Information Angel
Deceased Grandfather Sent A Message That Grandmother Would Would Die Soon
Readers Coincidence Stories