She Sees White Feathers As Being Signs From Those She Lost 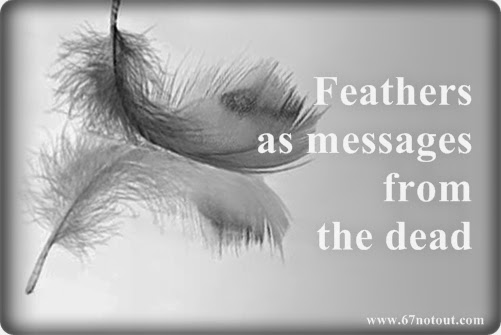 Today's touching story follows on from one I published on the 6th of February, The Dog Who Knew She Was Going To Die. This was by Marian Rusby and told of how her dog, Diamond, somehow 'knew' her mother was about to die. This is what happened next.


"This spring, every time I took Diamond for a walk, a white feather would appear on the pavement - and a few weeks later Diamond fell ill with a liver problem. The vet warned me that it was going to be a terrible few months for me.

That was in May and, as Diamond's health worsened more white feathers appeared. Every time I took her for a walk, a feather would float down, often landing on Diamond. I knew it was Mum sending me a sign that diamond wouldn't live much longer. I felt more at ease knowing Mum was trying to help me.

Diamond had a heart attack and a week later, she died. She was at home, but lying beside her was a white feather. The next day was the seventh anniversary of Mum's death.

The next morning I went into the garden and there, where she liked to lie, was a white feather.

As I stood there in tears, a butterfly landed on my arm and stayed for 15 minutes. I felt that Mum and Diamond had contacted me.

Knowing Diamond was going to die, I'd had time to think whether to get another dog. I love the Samoyed breed but they are difficult to come by and there is a waiting list for puppies. I phoned a lady in the Samoyed Association, who knew I'd nursed Diamond through illnesses, and she found someone who agreed to let me have one of a litter,

The puppies had been born four hours after Diamond died.

I didn't see any more white feathers, but on the morning I went to collect my new puppy, Crystal, there was a feather on my doorstep.

I know some people will think I'm stupid, but many will understand."