The UFO Timetable And The Melting Man 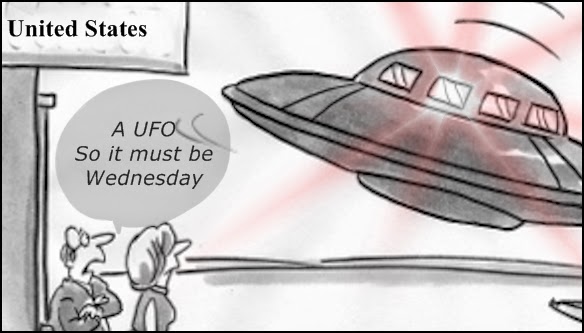 41 years ago The Pittsburg Press published a factual report on UFO sightings. I wonder if it's still relevant today. Here are the highlights:

In Holland, Dutch statisticians have found that Mondays produce the greatest number of UFO reports. A survey of 800 reports in Belgium has disclosed that the largest percentage of sightings in that country take place on Tuesdays.

In the United States Wednesdays generate more UFO reports than any other day.

Sightings in all countries tend to concentrate around the 10th and 21st of the month. But the two days that produce the most sightings of all are June 24 and September 24, and this 'coincidence' is true for many of the years since 1896. [The Kenneth Arnold UFO sighting of 1947 was on June 24]

There have been thousands of UFO sightings reported all over the world. Dr. Jacques Vallee, a French statistician, has catalogued 923 landing reports between 1868 and 168.

The creatures alleged to have emerged from the objects represent a menagerie of monsters - from 20-foot giants to tiny bearded characters only a few inches tall, From hairy creatures with glowing red eyes to animated tin cans.

England's Flying Saucer Review has been following the situation since 1955, and has compiled a massive file of worldwide landings.

Aside from the incredible bug-eyed monsters, the most commonly described UFO pilot is a being with long hair dressed in a seamless silver suit. He has oriental eyes, thin lips, an olive complexion and has unusually long fingers. Entities with these characteristics have been seen at one time or another in almost every country.

In innumerable cases, hysterical witnesses have claimed they were taken aboard saucer-shaped vehicles and given some kind of medical examination.

Apparently mysterious lights the aliens used, emit ultraviolet radiation. There are many documented cases in which witnesses suffered burns, similar to sunburn, after exposure to one of the objects.

The strangest injury of all occurred in the village of Araçariguama, Brazil, in 1946. According to Dr Irineu Jose Da Silverira, Joao Prestes Filho, 40, was struck by a mysterious beam of light (definitely not lightning).

Within hours, in frnt of a clustered horrified neighbours and relatives, his body began to deteriorate and his "flesh started to look as though it had been vooked for many hours in boiling water."

He did not lose consciousness and did not appear to feel any pain as lumps of flesh dropped from his body. His nose and ears fell off, the witnesses claimed. He died en route to a hospital.

There are other incidents in which witmesses have died shortly after a close encounter with one of the objects, apparently killed by radiation poisoning.

Until recently cases of this sort were rarely circulated beyond the pages of the UFO journals.

Other Recent Posts:
A Time Slip Helped Him Glimpse The London Body Snatchers
The Bizarre UFO Mystery And a Man Found Dead
Nearly A Beautiful Ending As She Glimpses Heaven