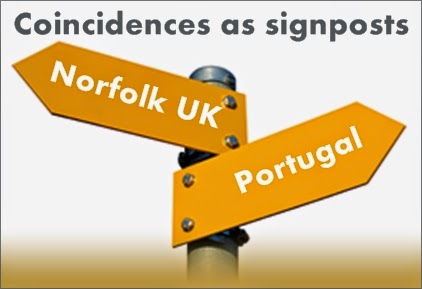 A coincidence story today from a 67 Not Out reader who wishes to remain anonymous.


My coincidence: we moved the family across the county border from Cambs (Cambridgeshire) to Norfolk. We might have moved to Timbuctoo as far as my father was concerned as he'd never left the village he'd been born in.

"I seem to remember my mother had relatives in Norfolk," he said, but couldn't recall where and had lost contact with them. "But my mother always wrote to them." he added.

The subject never came up again. We moved house again in Norfolk to a tiny village of not more than 200 population, with just one crossroads by the church.

Father passed not long after and we were sadly clearing out his belongings. Among the family photos were the postcards my grandmother had received from her relatives - from the very village we lived in (and Norfolk is a big county!) and the children of our 'lost' relatives lived just down the road. I was too shy to ever knock on their door though.

We'd bought the house from a man called Bernard with 'wolf' in the name. We again moved, this time to Portugal and bought our present house from a 'Bernardo' - that had "loba" (she-wolf) in the name.

Personal circumstances meant we would never have considered Portugal if we hadn't first lived in that tiny Norfolk hamlet. Two coincidences that I feel have been signposts, pointing us in the right direction - this is where we are meant to be.

Other Random Recent Posts:
Healing Ways With Our Hands
Sometimes The Pieces Fit Together To Create A Coincidence
Vintage Photos Taken From My Google Plus Page - 5