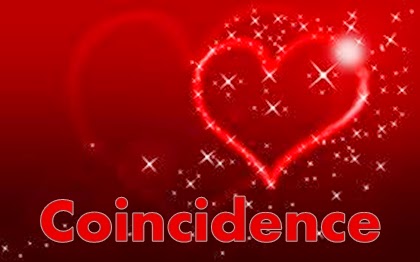 Genevieve Johnson's husband, George, died when he was only 62. She is now 82 but misses him greatly. He still pops up in her dreams. Just the other night she dreamed they were young again and rearranging furniture for another baby.

But a strange thing happened on February 14th, a coincidence some would say. Genevieve received a valentine card, and when she opened it she read that it was from George Johnson!

Needless to say Genevieve was overcome with mixed emotions. Her daughter said, "It's spooky."

Gradually though the 'miracle' unravelled. The local school teacher had instructed her students to make valentine cards to be distributed to local senior citizens. This they did and the cards were sent out.

The coincidence is that amongst the young boys, who made the cards, there was one called George Johnson and, by the strange hand of fate, this was the card that Genevieve received.

The card was decorated with a heart, a peace sign and the yin-yang symbol. Inside was written: 'Happy Valentine's Day. I hope my Bible verse will impress you: The Lord is with me to the end, Lord, your love endures forever.' Underneath this was the name 'George Johnson'.

Genevieve wrote to George telling him how the card had made her day She said that her Guardian Angel must have been watching over her.

There is one final coincidence to this story. It was arranged for George to visit Genevieve. He noticed her apartment number was 215 - and his class-room number at school is, yes, it's 215!

Other Random Posts:
Young Woman And Her Dog See Grandfather's Spirit
Photo Taken Of Father Showed His Missing Daughter
The Spunkie Doomed To Walk The Earth Until Judgement Day