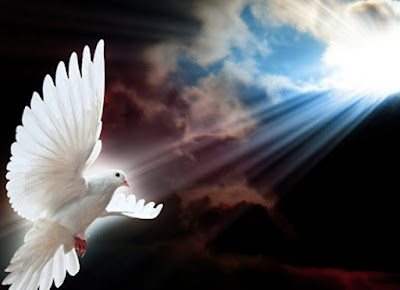 Two white dove stories or experiences. The first wishes to remain anonymous. These posts are where readers tell of seeing doves following a loved ones death.


My wife died in hospital following a long illness. As heartbroken as I was it was almost a relief that she was no longer in pain. I hoped beyond hope that she would now be at peace.

The morning after Maggie died I went downstairs to breakfast. I hadn't slept very much and bleary eyed looked out of the window. At that exact moment a beautiful white dove landed on the grass and sat looking at the window. I opened the door to have a better look and I swear that the dove looked at me with a sad expression and then flew away.

That evening the dove returned. I had never seen one in my garden before. Again as I went outside the dove looked at me before flying and circling my house.

On the day of the funeral, there was no dove to be seen until the coffin was being lowered into the ground. I don't know if it was the same one, but it sat on a tree branch, high up, looking at what was happening.

My son says it's simply all a coincidence but I feel deep inside it was Maggie watching over me, signalling she is all right. I hope so.


My nephew passed away this past Tuesday, August 25, 2015 on a motorcycle accident. He was only 25. He was a compassionate and an ambitious young man.

Two days after his passing a white dove appeared in the yard of his parents house and would not leave even when some people tried to get him to fly away. The dove persisted on hanging around his fiancé and appeared when his aunt was praying and calling to him.

We have never seen a dove around our town or city. This is very unusual. We believe this was our nephew's spirit letting us know he is in peace.