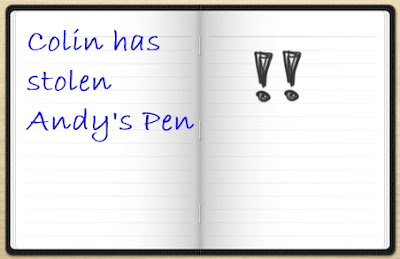 From my clippings a double coincidence by David Mann.


When I began my teaching career, I was lucky enough to be able to teach English at Craigroyston High School.

One day while preparing for a lesson, I decided to write ten sentences for the children to copy down and then put the apostrophe in the correct place. Among the sentences was: COLIN HAS STOLEN ANDYS PEN.

I knew that the children would laugh at that because, although they were pleasant characters, Colin Reilly was invariably well behaved, while Andy Henderson could be a bit naughty at times.

A couple of hours later, I arrived at the classroom for my lesson, and found there was silly behaviour going on, so I asked what it was all about.

"Colin has just taken Andy's pen, sir!" a helpful voice called out. "Colin is naughtier than you think!"

I stared in amazement at the next sentence in my list: "COLIN HAS STOLEN ANDYS PEN".

When I told the children, they would not believe me until I showed them the piece if paper.

Thirty-four years later, my wife and I were standing at the back of a long queue at London City airport, waiting to board a plane to Edinburgh.

We began to talk to an elderly couple in front of us. For some reason, I thought I'd mention the apostrophe story.

Just after I had told the story, a guy in his 40s, who had turned round a few times during it, suddenly said: "Mr Mann! I am Colin Rielly!"

I'm sure anybody could imagine my surprise.