The Incredible Coincidence Of The Thai Teachers 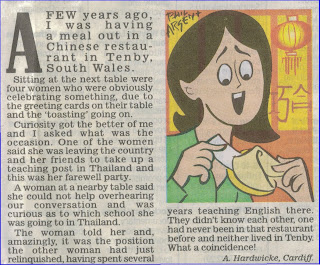 Here's a coincidence from a cutting I received from the British Daily Mail newspaper. I've printed out the wording again as the text on the right may not be too clear.

"A few years ago, I was having a meal out in a Chinese restaurant in Tenby, South Wales.

The woman told her and, amazingly, it was the position the other woman had just relinquished, having spent several years teaching English there.

They didn't know each other, one had never been in the restaurant before and neither lived in Tenby. What a coincidence!"