Loads Of Paper Money And The Cornish Banknotes 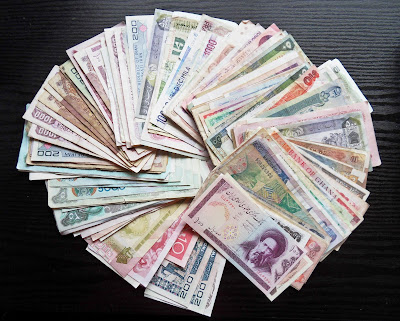 I've got a whole bunch of paper money, currency banknotes from around the world. I accumulated many of these from when I used to publish worldwide magazines. I accepted all currencies but there were lots that the British banks wouldn't accept. I've many from places like Iran and Iraq - some brand new with Saddam Hussein on the front. Well, new at the time I received them as this was pre-Bush and Blair.

Amongst the collection I was rummaging through a couple of days ago was one from Cornwall - yes, Cornwall in England!

The following day, by coincidence, I got talking to someone locally and they asked if I remembered the time when a group in Cornwall tried circulating their own Cornish banknotes. 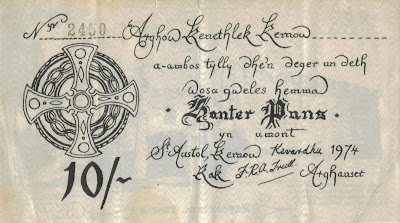 This Cornish currency was issued by the Cornish Stannary Parliament under the name of the Cornish National Fund.

I won't go into the full details of the Cornish Stannary Parliament (CSP) but there is a section of the Cornish people who campaign for the restitution of Cornwall's legal right to govern itself, and do not recognise the British Parliament at Westminster, London. The reasons are quite complicated but fuller details can be seen on the CSP website. The general opinion is that Cornwall is a county of Britain and not a separate country or region.

The self styled Clerk to the Stannary at the time of these banknotes was a man called Frederick Trull. However, in 1975 Trull attempted to 'arrest' court officials at St.Austell's Magistrate's Court when he was being tried for a motoring offence. He produced twenty-five pages of documents to try and prove that the court had no jurisdiction over him in Cornwall. He obviously lost the case and was found guilty of using threatening words and behaviour with intent to breach the peace.

As Trull's signature (see on banknote above) was on the Cornish banknotes issued in 1974 they were all burnt - but I still have one copy - number 2450!

Strange, but you never know when whatever you have been looking at will pop up in conversation a short while later. Coincidence or Synchronicity or Chance?

P.S. While on the subject of currencies the Euro has had it's problems and there have been suggestions that it could collapse and countries would have to revert to their original currencies: Francs, Guilders, Marks, Lire and so on. Interesting, as I have a German 50 Million Mark banknote! Think the German's would honour this, if the Euro did collapse? After all it is genuine!! 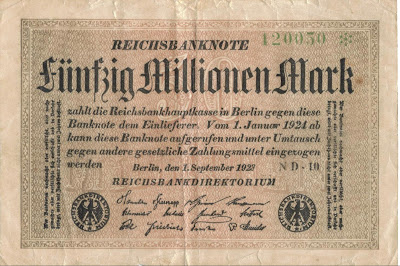