Today: The Beginning Of The End Of Our Civilisation 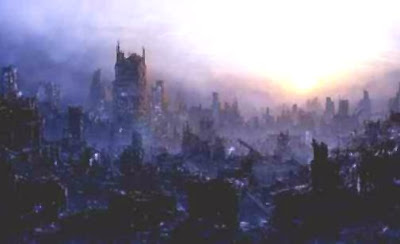 Is today the beginning of apocalyptic happenings that will see the end of our civilisation?

I've previously published posts about Orion and how the constellation's belt has been replicated on earth by ancient civilisations at places such as the Hurlers Stone Circles and Thornborough Henge in Yorkshire England.

Why did these ancient civilisations respect Orion? Surely not simply as a calendar, this doesn't ring true.

When digging deeper into the mystery of Orion I came across the theory that the Transit of Venus, as it passes over the constellation of Orion, will signify 'the coming of the end of times'. The book the Orion Prophecy by Patrick Geryl and Gino Ratinckx, for example, believes this to be the case.

June 5th/6th 2012 are therefore significant days as there will be a Transit of Venus. Will this bring about catastrophic earthquakes and tidal waves as predicted by some?

I'm not an astronomer or even an astrologist but this is what was said in the Daily Mail about the Transit of Venus:

"June 5/6 is a significant date because there will be a Transit of Venus.

Although the Sun, Venus and Earth roughly line up every 584 days, the orbits of the Earth and Venus are tilted with respect to one another so Venus usually passes above or below the Sun with respect to the Earth.

A transit takes place only when the three bodies are in line, and this is rare. Transit of Venus occur only in 'pair of pairs' patterns, repeated every 243 years. Two transits take place in December (around the 8th of the month), eight years apart. One hundred and 21 years and six months later two June Transits occur (around June 7th), again eight years apart. After 105 years six months the pattern is repeated.

The transit is an exciting time for astrologers, especially as Venus will be transiting the Sun in what is called a retrograde motion - it will appear to be going in the opposite direction of our planet.

Okay, but where does that lead us?

Firstly one date to notice in the above is the first transit of June 8, 2004. Six months following this was the dreadful 2004 tsunami and earthquake in the Indian Ocean. Think of this as you will.

Now we move on to what The Orion Prophecy suggests. The authors say an equivalent transit was in 9792BC which was the culmination of a cycle of the Mayan calendar - this, it is claimed, was when Atlantis was destroyed.

The book goes on to say that June 5/6 transit heralds a similar catastrophe which will occur on December 21, 2012 which is when the Mayan calendar completes its current cycle. This is why today June 5th 2012 is the beginning of the 2012 Phenomenon which, some would say, will lead to the end of our civilisation.

Personally I'm more positive. No one can deny that there are changes happening in 2012 already, think simply of the worldwide financial crisis and the uprisings in various countries.

Yes, change is on it's way, but life is change. Nothing stays the same. I'd like to think that 2012 heralds not disaster but a shift or transformation in mankind's outlook both spiritually and physically. The so called time capsule that is the 'Hall of Records' may not be some physical record but something we sense and feel inside.

There could be exciting times ahead. Perhaps that's why the ancients replicated Orion's belt on the ground, they knew something we have forgotten. 2012 may be our wake-up call.

Other Posts:
The Mystery Of The Three Hurlers Stone Circles
Mysterious Links Of The Ancients To Orion And The Afterlife
The Orion Bug Lets The Imagination Take Flight