Signs And Meaning To The Moon And Jupiter 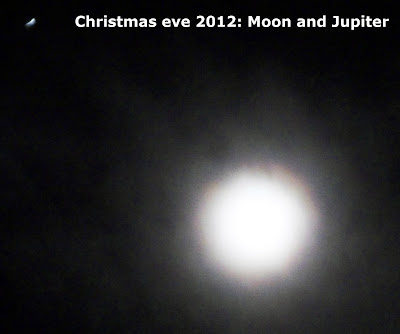 Symbols, signs, synchronicity: they all depend on what is meaningful to us personally and how we interpret them. It's not something that can be found in books - though they can be a guide - instead, it's what we feel deep inside.

Others may laugh and mock at our interpretations, but that's okay, people will often ridicule what they don't understand or don't want to understand. The fact is that - if we think we've had some sort of message or guidance via symbols, signs or synchronicity - then we probably have.

If it's good news enjoy it, if it's not so good go careful.

On Christmas eve Karin and I were talking about people we had lost over the years, and how they had been involved with our enjoyment of the festive time: my dad and mum, Janice, Karin's mother and so on.

As Karin made her way upstairs to bed I said something about how good it would be if there was some sort of sign that they were watching down on us. Not sure why 'down', when there is no right way up or down, but there we go.

I went to lock our front door and for some reason stepped outside into the damp, cold air. I looked up and the moon looked so different from usual, it almost had a halo and I smiled to myself that our lost family were looking down on us.

There was also a star to the left of the moon that was extra bright. I took a few snaps with my camera, they weren't too good without a strong zoom but they did show an orb in a couple of the photos - well, maybe.

I later learned that the bright star was in fact the planet Jupiter. I also read that this would be entering my astrology sign in June of 2013 and that this will bring an 'emotional attachment to home and family.'

The small piece I read on the Internet also said that, 'this might be a good time to start researching the family tree and find out about your roots.' I actually mentioned in a post a few days ago, The Biggest Coincidence There Has Ever Been, that I had just started to do this. I even published a photo an ancestor.

I guess what I'm trying to say, in a roundabout way, is that how the moon and Jupiter looked on Christmas eve was meaningful to me - no matter what others may think. And this is the what I was on about at the beginning of this post about symbols, signs and synchronicity: it's the feeling of their meaningfulness that's important.

Wonder what or who told me step outside on Christmas eve? But, whatever, we had a wonderful Christmas and everything was perfect. 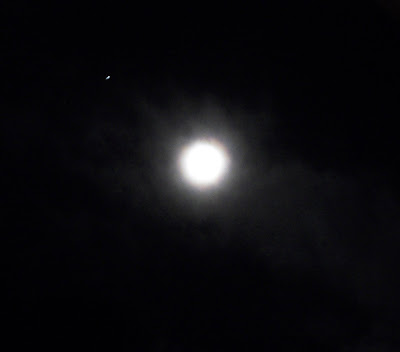 Further Reading:
The Orbs At St Cubys Church Tregony
Distinguishing Between False And True Signs
Position Of The Sun And Moon Caused Titanic To Sink


And Finally ...
Question: What do you get when you take green cheese and divide its circumference by its diameter?
Answer: Moon pi.