The Ghost Of Her Grandmother Visits To Give Her Advice 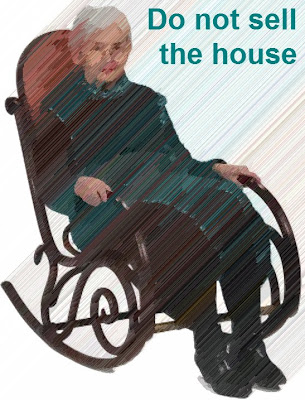 My wife and I were out walking when we bumped into Trish (not Trish of synchrosecrets - she lives in the USA) who was walking her dogs. We don't know her well, she's someone we often see when we are out and about, and we tend to chat for a while.

Trish and her partner are in their late 60s and her sister suggested to her strongly that she should move to a smaller house. Perhaps a two bedroom bungalow.

She told us she was reluctant to do this for a couple of reasons. Firstly it's been her family home for several generations - her mother lived there and before that her grandmother. The house had been handed down. Also it is convenient for shops and other facilities.

Trish decided, however, to still go to an estate agent and see what smaller properties were available and at what price. After thinking about it, she thought moving did make some sense as it would leave her with a cash surplus.

She looked at a couple of properties and decided to get the estate agent to give her home a valuation the next day, out of interest.

That night she dropped off to sleep as usual but had the most vivid dream she can remember ever having. The dream featured her grandmother who was sitting in a rocking chair in the living room. She didn't look too pleased.

The 'dream' was so real Trish woke up filled with emotion. Somehow though she eventually managed to go back to sleep.

Next day in the morning, after breakfast, she went into the living room and there was water drip, dripping from the ceiling onto the rocking chair where, in her dream, her grandmother had been sitting.

There was a small leak, which had to be fixed by a plumber.

The crunch of the story is that Trish is convinced that the dream and the leak are connected. She sees them as being signs that her dead grandmother was telling her not to sell the house.

Trish phoned the estate agent to cancel the valuation. She was going to stay living where she was.

So, was it just a dream, or her grandmother telling her not to sell, or maybe a precognitive dream about a pending water leak? Whatever we may think Trish made her decision and acted on this.

Other Ghostly Stories:
Dead Grandmother Gives Her Sherbet Lemon Sweets
The Ghost Who Wanted Sex With Kate
Her Grandmother Visits Her From Beyond The Grave