Coincidence Of Repeatedly Seeing The Numbers 711 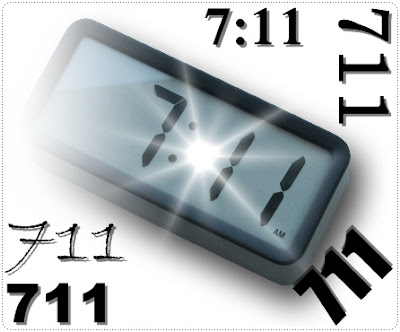 An emotional coincidence or syncronicity story today from Victoria. She would be interested in any feedback or thoughts as to why she has seen the numbers mentioned in her story.

Anyway, I started to get to know him and become friends with him and went out clubbing with him and his friends. We ended up as a couple and we were together for a few years. He was very troubled and he had sadness in his heart. He was unable to function normally in a relationship, we broke up but remained friends since.

So about six years later, in November of 2011 I started seeing the numbers a lot more than usual. The orange juice carton I had bought had the use by date of 7 11 11. I started to worry because when I called him, his phone was always off. I left messages, but he never returned my calls. I had a dream that he was crying and asking for my forgiveness, I hugged him and gave him my forgiveness. A couple of days later, I got a call from my friend and she said that they had found his body and that he had taken his own life. The date of death was 7 11 2011.

I have since had many dreams about how things could have gone differently for him, dreams that he was alive had he chosen a different path. I think that he was predicting his own death without really knowing it, and had he not chosen to take his life that day that he would have died some other way.

I don't understand why I was also seeing the numbers. I thought that maybe it was because I could have saved him somehow but now I believe that it was his fate to die that day. He was a very important person in my life and he made me the person I am today.

I tried to help him but he didn't want help from anyone. So I am still perplexed as to why I saw the numbers. I don't see the numbers as often any more. Since he died I've seen the numbers only a handful of times, but when I do I say hello to him just in case he is there in that minute.