The Reptilians From Venus And Draco Inhabiting Earth

It's difficult at times to distinguish between fact and fiction, often they run almost parallel to each other. Take reptilians for instance. Not those native to Earth but the ones who visit us via UFOs.

Top of the most reported UFO aliens are the so called Grays with their big heads, spindly limbs and large black featureless eyes.

If a list was compiled of such things, most likely in second place would be the reptilians - lizard-like with scaly skin and yellow eyes. They have been popularised in science fiction for decades - but is there any reality to more current claims?

If we look at the 1940s Hefferlin Manuscript, which I mentioned when writing about Antarctica's Rainbow City, it suggests that evil reptile like creatures from Venus invaded Earth to do battle with the Martians of Rainbow City.

This all happened a long time ago, of course. The Manuscript reckons two and a half million years ago, to be precise, when both Mars and Venus were still habitable, as was Antarctica on Earth. 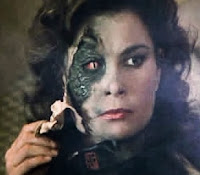 More recent UFO contactees suggest that these reptilians come from solar systems in the constellation Draco. These guys are generally given negative portrayals - almost similar to the V storyline - obviously this is a 'coincidence'.

I was reminded by something that Darren had written on his blog about how David Icke sees such reptilians as being the Masters of the World.

In his version of events a race of reptilian aliens from Draco crossbred with humans to produce a bloodline who rule the world, unknown to us naive humans, while pure bred reptiles still reside in caverns far below the Earth's surface.

It's interesting that JK Rowling named a character Draco - the only child of Lucius and Narcissa Malfoy (née Black), who were both born into old, wealthy pure-blood families.

Who are these crossbreeds, running our lives? The popular answer is the British Royal Family, European Royalty and US Presidents stretching from George Washington to George W Bush and on to Mr Obama. 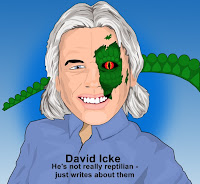 According to Icke it's these reptilians who are responsible for the suffering on Earth by manipulating humanity through secret societies. These cause wars, poverty and the majority of social ills. The Illuminati, The Knights Templar all play a part within the idea of the oft mentioned New World Order as their goal.

Icke's theories aren't founded on much evidence, but that doesn't mean they are necessarily fiction. For example his claim that George Bush Sr is a reptilian crossbreed is dependent on the testimony of one person who claimed, under hypnosis, to have been used as a robotic sex slave by most of the world's leaders. Icke also supposedly knows of  people who have witnessed Bush shape-shift into a reptile form.

There's also a theory that perhaps dinosaurs didn't completely die out. I wrote in a post UFOs And Visits From Reptilian Dinosaurs: "Supposing the dinosaurs did actually develop more than we believe. What if some of them did advance and started to use forms of tools and maybe developed technology, towns and ... well, whatever. Remember they had 165 million years to do this - 33 times longer than humans."

Okay, sounds far fetched but so is life itself.

If we go back to those secret societies 'who rule the world' they work together because they all originated from The Brotherhood Of The Snake. The Encyclopedia of Secret Societies say that this brotherhood is, "... the oldest secret society in the world, founded in prehistoric times to carry out a diabolic plot of world domination and enslavement, culminating in a New World Order in the very near future." 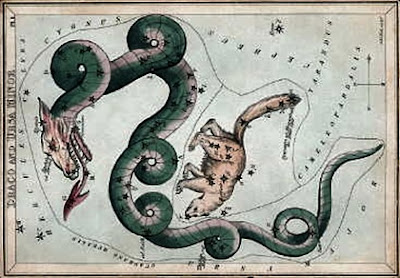 The above image shows Draco coiled around the north celestial pole, as depicted in Urania's Mirror, a set of constellation cards published in London c.1825. We have, therefore, what looks like a reptilian-cross between a snake and a dragon.

So once you start rooting round lots of parts hint that they fit together. Some would ask: what came first the UFO and alien sightings or fiction? After all lizard men were featured in many pulp fiction science fiction magazines prior to Icke and his ilk. 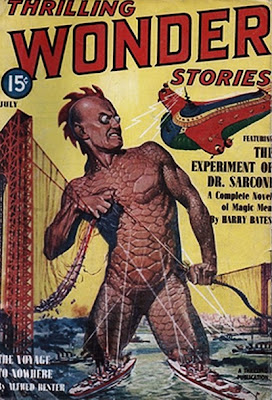