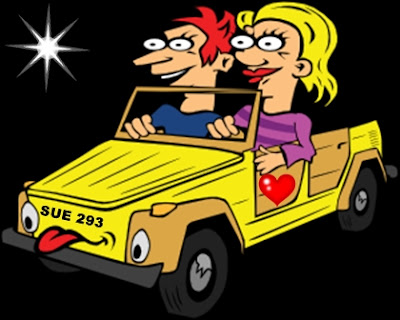 A reader's coincidence story today from Sue - just follow those signs and instincts!


"This is my coincidence story, and it has a happy ending.

"Going back eleven years I had an old car that wasn't very reliable. I was in a car park after doing some shopping in town and when I got back to the car it wouldn't start. I didn't know what to do so phoned my dad who said he would be over in about half an hour.

"I sat in my car while I waited and couldn't help but notice that the car opposite had the number plate SUE 293. My name is Sue and my birthday is on the 29th of March.

"After ten minutes or so a very cute guy about my age got to the car and opened the boot while he put in some bags. I felt I should say something to him about the connection with his number plate but felt too shy to do so. He got in his car and drove away. Dad arrived and got my car started.

"About two weeks later I was at a friend's party and met this guy. I felt I knew him but couldn't place his face at first. He asked me on a date and then I remembered where I had seen him before. He was the guy with the SUE 293 number plate.

When he picked me up at home he was driving a different car. I asked him about the number plate and he told me it belonged to his mother and he must have been driving her car on the day I first saw him. Her name is also Sue.

"The date went well, very well and we have now been married for nine years and have two lovely children.

"I sometimes think about how I could easily have never seen my now husband again after the car park. The moral of the story is most likely that I should have followed my instinct in the car park that day. Fortunately I was given a second chance.

"His mother sold the car with the number plate a few weeks after we went on our first date."