Precognition From Beyond The Grave 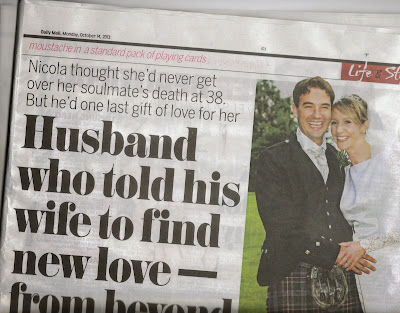 Sometimes we can say something without realising how this may influence or effect someone else. Even a throw-away remark can come back at us years later.

But I wonder if sometimes our unconscious mind encourages us to say something that will be important to someone in later years, when the hand of fate plays its role. I'm probably not explaining this very well so here's an example of what I mean.

Nicola Campbell's husband, Colin, died suddenly and unexpectedly at the age of 38. Their children, Evie and Isla, were just 22 months and nine weeks old. Needless to say she was shattered. As she explained to the Daily Mail.


"The unspeakable grief I felt at having him ripped so suddenly from our lives may be less raw, but it will never leave me ... At first, I could barely function. Even trips to the supermarket threw up all sorts of heartbreak. I’d find myself weeping in the aisles because, for a second, I’d forgotten he’d gone and almost bought him a special steak, or thrown his usual razors into the trolley."

Being a widow with small children is lonely and then Nicola met Cameron a sales manager:


"On our first dinner out in June, all the cliches applied. Conversation flowed, he made me laugh, there was a spark and I could tell he was more than a one-date-kind-of-date. A dad of two boys, aged three and eight, and going through a divorce, he is thoughtful, sensitive and caring."

Nicola thought she might be haunted by what Col would have thought about this new relationship if wasn't for an email she received from Ed, Col’s best friend who was best man at their wedding.


"He wrote to tell me about a morbid conversation he and Colin had had a few years back, around the time we had Evie, about what they would wish for their wives if they should die.

'Col told me he would want you to find someone else,' Ed wrote.

'I made some joke about it, suggesting his ego would surely want some hardcore mourning, but he repeated himself and was very clear.'

'He explained that he would want you and Evie to be happy, which he knew meant you should be free to find someone else. This has his blessing.'

These words felt like a message directly from Col."

So I wonder if Colin said those words to his friend Ed because he felt, unknowingly, that something may happen to him. Could he have had a glimpse somehow of what fate had in store and said those words to help Nicola continue with her life and find happiness again? The Daily Mail headed their article: 'Husband who told his wife to find new love - from beyond the grave.'  Maybe a tad over the top but could well have been a precognition.

Other Random Blog Posts:
A Child's Precognition Saved His Family From Death
Precognition And The Indians In Labrador
Sometimes Things Happen Because They Are Meant To Happen

Email ThisBlogThis!Share to TwitterShare to FacebookShare to Pinterest
Labels: Messages from the dead, Precognition