The Oak Leaf Tattoo Told Her This Was Her Soul Mate

Following on from Friday's post, Dead Brother Rung His Sister's Doorbell, here's another strange story from a Daily Mail reader known as Vampira from Southampton, England. Again this could well be precognition, aided by a vivid dream, and/or the meeting of a soul mate. 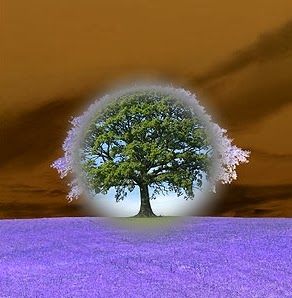 "When I was 25, I was meditating and I saw almost like a film being played in my head. I was flying above fields and woods and could see a white dot on the ground. I flew lower only to discover it was me... barefoot dressed in white walking across a field towards a solitary oak tree.

As I approached the tree a door opened in the trunk and a man dressed in green, with a garland of oak leaves around his neck, stepped out and took my hand. I felt immense love for him and we walked off together.

I tried drawing a picture of his face afterwards. He had red blonde hair,blue eyes and dimples.

Ten years later I met a man and fell for him instantly.He had the exact same face as the man from the tree. I told him about the dream and when I got to the part about the oak leaf garland around his neck he went white as a sheet.

He took his top off and there was a huge tattoo of an oak leaf garland around his neck. True.

We are now married with children now and have been together for nearly 10 years."

Other Random 67 Not Out Posts:
Dead Brother Rung His Sister's Doorbell
The Mysterious Skull With The Golden Wreath Of Protection
10 Story Posts Featuring Dreams