I came across this coincidence story from the author Liz Fenwick by 'chance'. As her books are based in Cornwall - where I live - I felt compelled to publish her story.


"This is a rather long coincidence story that I will try and make short. It involves a photo, friends, a pig farmer, and Cornwall.

Back in 1987 I was working at a large insurance agency in Boston, MA when a new employee started. She was from England and we hit it off, becoming close friends. This was before email and digital pictures became common place and she received a letter and some snaps from her best friend in London. 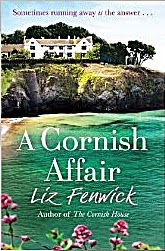 I glanced at the photos of a group of friends at a ball in Cambridgeshire. There was one picture that remained in my mind of a man in a dinner jacket walking down a grand stair case.

Jump ahead two years and I have moved to London and am living with my friend’s best friend in Clapham. It’s the first May bank holiday (I’ve been sharing a flat for five days) and she has a blind date with a pig farmer for tea at the Basil Street Hotel.

She takes me along for a wine drenched lunch on the Kings Road beforehand. Waiting for us at the table is the man from the picture, but I don’t realise that right away. The pig farmer and my friend didn’t work out but a month later the man in the dinner jacket took me to Cornwall for the first time and I lost my heart to both - Cornwall and to him.

If I hadn’t met him (now my husband) I might never have made it to Cornwall and never been inspired to write and The Cornish House, A Cornish Affair and A Cornish Stranger would never have happened!"

Other Recent Posts:
The Power Of Magnetic Hematite Stones
Valletta: The City Built By The Knights of the Order of St John
The Maltese Fisherman Who Visited Heaven