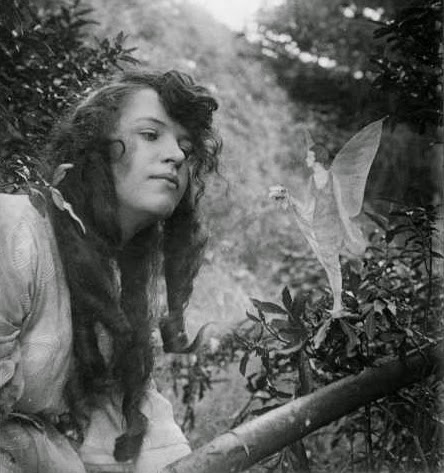 I was doing some research about Sir Arthur Conan Doyle, most famous as being the creator of Sherlock Holmes.

He became interested in spiritualism following the deaths of his first wife, son Kingsley, his brother Innes and two brother-in-laws. As with many people who have lost loved ones he started to search for answers and the proof of existence beyond the grave.

At times Sir Arthur seems to have been led astray by such things as the Cottingley Fairies photographs (right) but nevertheless came to believe that life did continue after death.

I came across the following release from The Associated Press after Sir Arthur's memorial service in July of 1930. The mystery is, as to whether his wife received a message from him following his death. Lady Doyle claimed she did :


July 1930
The widow of Sir Arthur Conan Doyle was heartened today by what she accepted as a spirit message from her husband who died last week.

A medium, Mrs Estelle Roberts, claimed to have received the message after a public memorial service at Albert Hall had ended with fifty or more of the audience of 10,000 walking out in protest at five alleged spirit messages from other persons long dead and gone.

The medium walked across the platform to Lady Doyle and said, "I have a message from Sir Arthur. Sir Arthur told me that one of you went into the hut (a building on the Doyle estate at Windlesham, Sussex, where he was buried on Friday) this morning. Is that correct?"

"The message," continued the medium, "is this: 'Tel Mary ...... !'" At this point the pealing of the pipe organ to overcome the noise of persons walking out, drowned out her words.

Lady Doyle declined to say what the remainder of the message was, merely explaining, "I can't. It's precious and sacred. I am perfectly convinced the message was from my husband. I am as sure that he has been here with us as I am sure that I am speaking to you. It is a happy message, one that is cheering and encouraging.

It's interesting that at the memorial service a chair was left reserved for Sir Arthur's spirit. It's reported that his eldest daughter, Mary. was seated two chairs away from the 'empty chair'.

I wonder what the cheerful and encouraging message was to Sir Arthur's wife - oh, and could it have been genuine, whatever it was?

Other Recent Posts:
Issie The Monster In Lake Ikeda Japan
Robin Hood And The Information Angel
She Phoned The Same Place At The Same Time As He Did