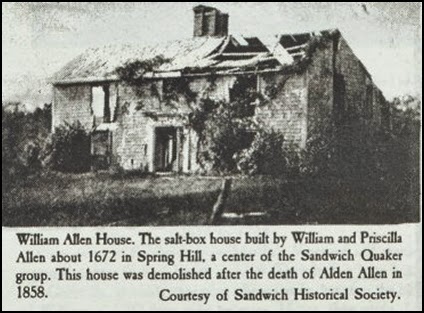 Barry Simon referred to a post I wrote about JK Rowling And The Harry Potter Birthday Coincidence. On this I wrote:

"She [JK Rowling} discovered, however, a surprising coincidence in a room in the Paris records office - which looked to be the double of Hogwart's library. Her great-grandfather was born on the same day as Harry Potter: the 31st of July."

Barry had something similar happen to him. Here is his story:


"I had a similar experience.

I wrote a time-travel story called The Crystal of Aromythia. The main character's name is William. At a certain point in the story I had to come up with a last name. "Allen" popped into my head.

At the time I began to look into going to a Quaker Meeting. I found one on Cape Cod that I resonated with. It was quite a drive but felt drawn to it.

I latter found out that my ancestors started that Quaker Meeting in the 1650s, the first in all of North America. One of the pivotal ancestor's name was William Allen."

Out of curiosity I thought I'd check out William Allen at Cape Cod on Google and read that "Between 1669 and 1684 the town appointed Daniel Wing, William Allen, Edward Perry ... Source

I have ancestors called Edward Perry! What a web synchronicity and coincidence weave!

P.S. I see that there is a Kindle edition of  Barry Simon's book on Amazon :
The Crystal of Aromythia

Other Recent Posts:
Father And Daughter Re-United Through Coincidence
The UFO Timetable And The Melting Man
Robin Hood And The Information Angel