Sightings Of Flying Saucers From The 1950s 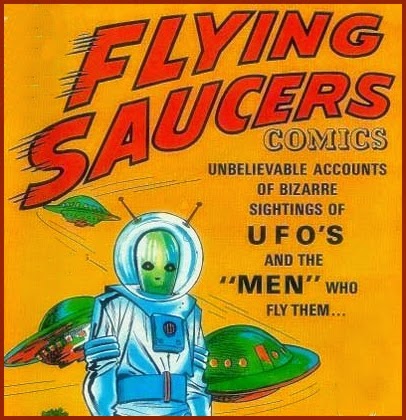 I was having a backwards look at UFOs to when they were known as flying saucers. My time machine stopped at 1950 and this is what was being reported.


What was described as a flying saucer was seen by about 50 persons at Dayton, Ohio, yesterday [March 8 1950].

The strange glittering object was visible to the entire personnel of the Vandalia Airport. A National Guard fighter pilot chased the thing up to 37,000 feet where it disappeared.

Gilley Stevens, chief meteorologist at the field said the 'saucer' must have flown at least 30,000 feet high because he saw it disappear behind some ice clouds which usually form at that altitude.

He reported the object seemed to move erratically at first but that it later remained motionless for as much as 15 minutes at a time.

Three Air Force non-commissioned officers said the 'flying saucer' had a shooting flame and a 'roar like thunder' dived near a beacon just north of the field.

Corp. Roger G Pryor, a control tower operator at the field, said he saw a blue flame shooting out as the saucer flashed by from the south-west and headed north-east. "I thought it was a falling star. But it didn't fall. It just kept going," said Pryor.

He estimated the object was 50 feet in circumference and when first seen was about 1,000 feet overhead. Its speed at first was about 100 miles an hour, then increased to about 500 miles an hour before disappearing behind the Hollywood Hills.

"It was in sight about 45 seconds," said Grant. "It left no exhaust trail and made no sound."

His story was confirmed by Gilbert MacGill, president of a firm conducting research with helicopters.

Grant said he had about 900 hours in the air during the war as a photographer and gunner. "I've always been skeptical about flying saucers," he said, "until now."


Those non-existent 'flying saucers' are flitting about district skies again.

No less than five discs have been reported during the past month bringing the total to eight for Western Pennsylvania. Several saucers were seen by groups of people. others were reported by reliable observers.

So far the 'little men' inside have not crawled out.

Not too much detail from the Pittsburg Press above, but they did include a map of recent [1950] sightings as seen below: 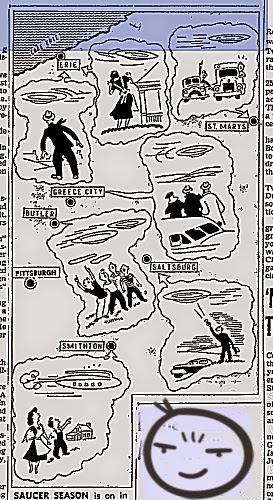 Other Random UFO Posts:
The UFO Travellers From Ancient Egypt
The Alien Visitation And UFO Sighting
Ezekiel: The Alien Abduction Of The Bible