What Are The Odds Of This Happening? 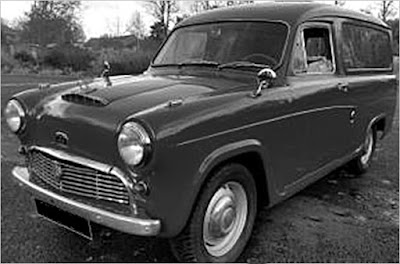 I don't know what's happening to the Daily Mail newspaper as they keep turning up with coincidence stories. Here's one from Bob Windsor:

"The coincidence that happened to me has, I am convinced the odds of billions to one of re-occurring.

"In 1968, while working in Belfast, I met a young lady, and after my return to Hertfordshire some time later, she eventually joined me. By then I had left the company I was working for in Belfast and had joined Mars Confectionery as a salesman. I was given an Austin van in which to transport the comprehensive range of chocolate products to sell to newsagents and confectioners.

"During the early part of our relationship, we had decided to return to Belfast to meet up with her mother and, before the trip, my van had been replaced with a gleaming new white Ford Cortina estate car: I could not have been prouder.

"In Belfast, it was decided I should be presented to other family members so my young lady, her mother and I set off for somewhere in County Antrim.

"During the journey there was a lull in conversation, and I started to relate the story of how and why we were driving along in a new car and that, prior to this, I had inherited a ratty old grey Austin Westminster van when I had joined Mars.

At this point a grey Austin Westminster van suddenly appeared coming towards us. As I was at pains to describe the vehicle to my girlfriend's mother, I shouted out: 'Ah, just like that one there,' - only for me to realise it had the same registration KGY 174D that I'd parted with only two weeks earlier.

"As we were on a single-carriage road, I was unable to pursue the van to inform the driver of the chance in a million event. Cursing my luck, we drove on and thought no more about it.

"Two days later I was driving in Belfast centre, and as I approached the traffic lights at City Hall, the very same van was in front of me waiting for the lights to change.

"I jumped out, and although the driver was reluctant to open his window, he did eventually listen to my tale, with considerable incredulity and disbelief.

"I asked whether he had the driver's log book. He did and I was able to tell him that the previous owner was Normans of Westminster and that there was evidence of rust on the inside of the radiator where I had a repair made. He checked and I was right, and the new owner now believed my story.

"On the day I'd first spotted it in Northern Ireland, he had that very morning returned via the ferry, having bought KGY174D in a car auction in South London.

"Seeing the vehicle in Northern Ireland not once but twice is in itself remarkable. But what I believe is mind boggling is that I was already talking about the very vehicle just before it came into view. How weird is that? And what are the odds of that Happening? Incalculable I would have thought."

Other Posts:
10 Coincidence And Synchronicity Stories
10 White Feather Story Posts As Examples Of Messages From The Dead
10 Ghost Story Posts