An Unexpected Link With My Mother 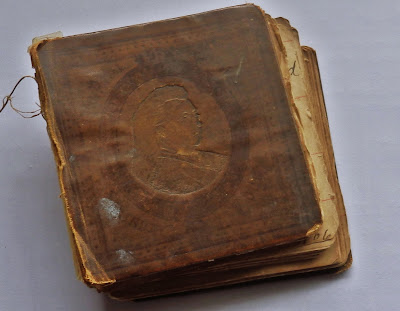 A couple of weeks ago I was sorting through a case I have containing bits and pieces from my parents and grandparents. Somehow, when I had finished with the case, this old book got left behind. It's been languishing on my desk ever since.

It's a Birthday Book which belonged to my maternal grandmother.

Today (I'm writing this on the 22nd of March) my computer was doing an update. While I was waiting I picked up the book wondering if there was an entry for this particular date. There was: It read: "Winnie started work at Blacks."

The coincidence is that Winnie (Winifred) is my mother and this was the day she started work after leaving school at 15. Sadly mum died in 2005 at the age of 93. I had been thinking about her recently and then this pops up!

A sad thing is that I don't know who 'Blacks' were. It's something that never came up in conversation and I never asked what her first job was.

Against every date in the little book are quotations. Against the 22nd of March this is the entry:


The heights by great men reached and kept
Were not attained by sudden flight
But they, while companions slept
Were toiling upward in the night
~ Longfellow

By another coincidence Longfellow was my mother's favourite poet. She had a book of his complete works, which I have mentioned previously.

Strange the links that always remain with us.

Other Random Posts:
Black Bart And The Stage Coach Robberies Which Started As A Joke
Issie The Monster In Lake Ikeda Japan
Batteries Re-Charged At Glastonbury