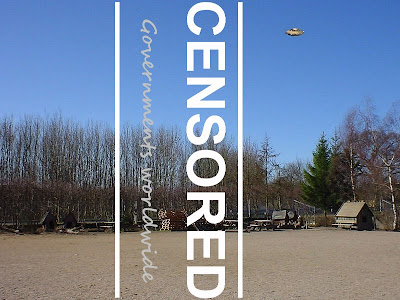 Nick Pope ran the UK Government's UFO Project between 1991 and 1995. He now claims that officials shredded the most compelling evidence and proof of UFOs that he had ever seen.

The 'proof' in question was a photo of a metallic UFO seen in the sky over Calvine in Perthshire. Pope said about the picture:

"This was easily the most compelling UFO photo I’ve ever seen in my life. It went to the technical specialists at the Defence Intelligence Staff and elsewhere. Their results of the analysis were that this was a real thing - it wasn’t a faked photo."

Also to be seen in the photo were two British military jets. He added about this, "It wasn’t clear whether they were escorting this thing or even maybe chasing it."

Pope says he had a large copy of the photo on his office wall. This showed "a diamond shaped metallic craft about 25 meters in diameter ... with jets in the background."

The question is: Where is this photo and other copies now?

According to Pope his boss, the Head of his Division, took his copy of the photo down and locked it in a drawer as he didn’t feel this should be on display.

Since that time the UK Ministry of Defence have declassified and released thousands of its UFO files, including photos, sketches, reports and so on. See: Over 6000 Pages Of UFO Reports and Secret UFO Files Released.

The strange, or maybe not so strange, thing is that the photo of the 'convincing UFO' was never seen again. When asked about this officials say there is no such record.

In Pope's own words, "I suspect that certain people thought that this was some secret prototype aircraft, a next-generation stealth that maybe nobody should be seeing. And maybe somebody quietly put it through the shredder and thought they were doing us a favour."

Personally I feel that the UK releasing UFO files, with a fanfare of publicity, was/is just a stunt to put everyone off the scent. They let the public see what they want them to see. Anything convincing is kept locked away, despite the supposed declassification of such material. The public are kept in the dark. And a similar pattern is no doubt followed worldwide.