Fancy A Royal Slice Of White Toast For £500 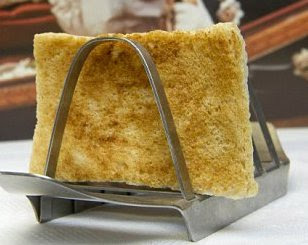 When the auctioneer saw the slice of toast brought in to be auctioned he thought, "Crumbs!"

But this was no ordinary piece of toast, this one was distinctly upper crust.

Okay, enough of the puns. This is why the toast is going under the hammer - though not literally.

The piece of white bread toast in question is claimed to have been left uneaten by Prince Charles on the morning of his 1981 wedding to Lady Diana Spencer, later to be Princess Diana.

The Buckingham Palace maid decided to take it from the breakfast tray as a souvenir instead of throwing it away.

The maid, who because of Royal protocol cannot be named, said, "It was on a toast rack on the tray and had not been buttered. I think it was just an extra piece he didn’t need."

It is said that the toast has been stored, uncovered in a china cup on a shelf in a cupboard. Somehow it survived because the cupboard was air tight and the toast had never been buttered.

So, there we go, the toast will be auctioned by Hansons Auctioneers and Valuers of Etwall in Derbyshire on the 19th of July. It could well fetch up to £500 ($700).


Don't think I know any jokes about toast, other than these two Awful Jokes - apologies in advance.

Q: What does a slice of toast wear to bed?
A: Jammies.

Q: Why did the man throw his buttered toast?
A: Because he wanted to watch the butterfly.

Other Offbeat Humour Posts:
Secret Of How To Be A Winner
Funny You Should Ask God About This Problem
Humorous Letters