On Friday The 13th Staying Home Is Recommended 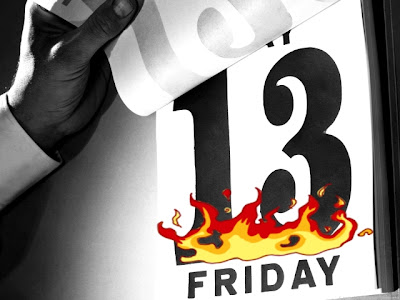 If you have a touch of paraskavedekatriaphobia be prepared that tomorrow is Friday the 13th - perhaps unlucky for some - and strangely there will be a further Friday the 13th in exactly 13 weeks time.

"On October 13, 1307, a day so infamous that Friday the 13th would become a synonym for ill fortune, officers of King Philip IV of France carried out mass arrests in a well co-ordinated dawn raid that left several thousand Templars - knights, sergeants, priests, and serving brethren in chains, charged with heresy, blasphemy, various obscenities, and homosexual practices. None of these charges was ever proven, even in France - and the Order was found innocent elsewhere - but in the seven years following the arrests, hundreds of Templars suffered excruciating tortures intended to force 'confessions,' and more than a hundred died under torture or were executed by burning at the stake."

Or maybe it's considered unlucky because Jesus was said to be crucified on Friday 13th - and there were 13 at Jesus' last supper. Who knows for sure but Fridays have been considered an unlucky day since the medieval times.

However, before we write off the fear of Friday the 13th as hocus pocus, here are the conclusions of the British Medical Journal in a research article called Is Friday the 13th bad for your health?:

CONCLUSIONS: Friday 13th is unlucky for some. The risk of hospital admission as a result of a transport accident may be increased by as much as 52%. Staying at home is recommended.

Other Recent 67 Not Out Posts:
The Guardian Angels From Somewhere
Magical Walk With Daphne Du Maurier To The Gribbin
Top 10 Coincidence And Synchronicity Stories