Robins And Butterflies As Messengers From The Dead 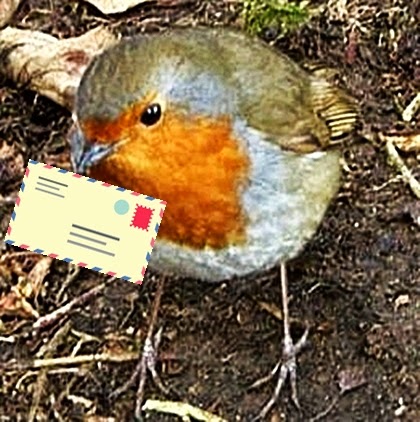 It's interesting by the ways people believe they are contacted by loved ones who have died. On this blog, for example, I have published many such stories where white feathers, white doves and butterflies have supposedly been used to send messages from beyond the grave.

I was thinking about this as another example came to my attention recently, from the actress Amanda Abbington.

When Amanda has to play sad roles she has a method for appearing heartbroken. She thinks about her grandmother. In her own words:

"I think of my grandmother when I'm playing heartbreak. I miss her so much since she died four years ago. She was the most incredible, strong, intelligent, loving woman who was blissfully married to my grandfather for her entire adult life.

For me they were the benchmark of true love.

It might sound mental but I still talk to her every day. We have two robins in the garden who come right up to the kitchen step. I feel sure it's my grandparents paying us a visit."

I can understand how she feels that about her grandparents. We have a robin in our garden and sometimes two. When I'm out there he seems to follow me about. If I'm digging and leave the spade in the ground he'll sit in the handle. If I go from the back to the front garden he'll follow me.

The logical reason for the robin to follow me is because I'm turning over the ground, or cutting the grass and this provides him with insects. But I wouldn't knock Amanda's belief.

My blogging friend Trish of synchrosecrets has written about how straight pins mysteriously appeared following the death of her friend's grandmother. And back in 2011 I wrote about strands of wool which appeared to Leanne after her mother died.

Many people will laugh and mock such suggestions, but those who have had such experiences have found comfort from them. You can argue that this still doesn't make them genuine, we tend to cling onto hope wherever possible, but let's at the very least keep an open mind.

Over the years I've had more blog visitors read posts about white feathers and white doves than any other theme. If we do live on after our stint on Earth then, just that fact, must make more things possible than we realise.

Other Recent Random Posts:
The True Story Of The Fanny Scratching Ghost Of Cock Lane
White Feathers Told Her That She Would Win Millions On the Lottery
The Telepathy Of Random Thoughts Of Kindness