The Aliens Examined Her Legs And Feet 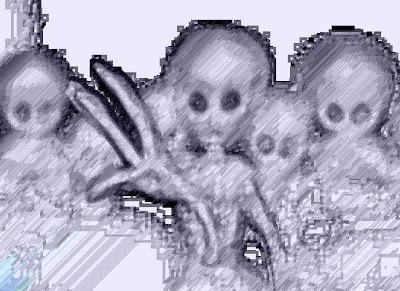 A story today by a reader who calls herself Revelation Petra. It's about her personal experience of the examination of her feet and legs by some sort of aliens. There's no UFO involved, the aliens appear to simply have arrived and then disappeared.

As with most stories received I have to take this at face value. There's nothing I can research to verify what is said to have happened. So, as I often say, see what you think.


"I had just arrived home from a friend's place and was lying on my bed  looking out of the window at the stars. I felt a sharp pain like a pin being stuck in my toe.

It felt like I was frozen and I wanted to yell out but didn't want to disturb my mother who was asleep in the next room. I was wide awake and had only just put my head on the pillow seconds earlier, thinking about tomorrow and things I had to do. I felt someone was in my room and there were sounds from the foot of my bed.

I couldn't see anything, and couldn't move at all. It was then that I felt hands around my feet where the pin prick had been. I could only lift my head slightly and I saw three small figures looking at me from the foot of the bed.

There were two small entities standing at the end of my bed and one was holding my ankle and examining it. While this was happening I hoped my mother, in the next room, wouldn't wake up and disturb these entities as they might panic and hurt her. After what seemed like just a few seconds I noticed three more figures standing at the foot of the bed and they stuck something in my leg.

I started to feel able to move again, only slightly and lifted my head off the pillow and saw right into their faces. They looked back but never stopped doing whatever they were doing. They knew I was looking straight at them and that I was wide awake.

They were not trying to intentionally hurt me and I felt no fear and I can remember everything that they did. I was aware of being awake and that this was not a dream. I tried to communicate with them but I couldn't talk as no sounds came from my mouth.

They looked quite solid, long arms but not abnormal, smallish heads, not extremely large, more like small children feeling around and playing. They were around three or four feet tall, dark greyish in appearance with lizard like scales, Their skin seemed the same colour throughout the body as far as I could see. They had a almost sad look about them and there was definitely some kind of rank as one or two ordered the others around - not with words or telepathy but they just seemed to obey without answering.

They still had hold of my ankle and reminded me of well trained doctors with nurses helping them, this was a real event. I noticed that they had three large type fingers that seemed to be too large to do anything intricate, yet they were doing things to me with the skill of a surgeon.

I felt no pain except for the initial discomfort of a pinprick in my toe.

They wanted to look at my legs and feet and didn't come near my face or touch any part of me except my toes and ankles, although they had direct contact with my eyes.

They seemed to be quite aware of my feelings and as they continued they would look my way to see if I was in any discomfort.

Before they left I noticed they looked back at me and then vanished.

It was then that I felt a sensation in my foot and toe and I immediately jumped up and went to the bathroom and looked in the mirror.

When I checked the time it was less than three minutes since I had arrived home. This was impossible as I had made something to eat when I first arrived home, went to the bathroom, got undressed and went to bed.

I then heard my mother talking and realised it was all over."

It's interesting that the 'aliens' appear to have a reptilian look which ties in with my post UFOs And Visits From Reptilian Dinosaurs.

Some will say that not being able to temporarily move or speak is part of sleep paralysis. I've experienced this myself a few times, but I can't remember seeing anything or anyone in combination with this.

I asked Petra if there was any after effects of what had happened. She answered that there wasn't other than 'her toe ached a little' the next day, though she feels she is 'more sensitive recently to other people's feelings'.

It's up to us as to what we believe.

Other Alien Experiences:
The UFO Visit And Abduction Experience
Was This An Alien Abduction?
A Dream Or An Alien Encounter?