The Man From The Spirit World Made Love To Her 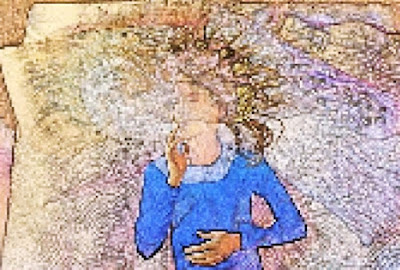 Today's theme runs on from my post Sleep Paralysis And Seeing People Who Aren't There - Or Are They? which all started with Kate's posts - links to her stories are at the end of this post. Kindly note, this subject may not appeal to all as it has a slight adult nature.

The latest story has similarities to previous posts. It's interesting that it also features sleep paralysis, which is reasonably common. As usual, I accept such stores and experiences in good faith - I realise they are difficult for may people to accept as being true. The author wishes to remain anonymous.

"I was about to got to sleep one evening when I saw something like fog or smoke enveloping me. With my eyes closed I felt someone embrace me tightly.

Then this entity kissed me on the lips for a few seconds, then left.

At first I couldn't breathe, but I let him kiss me anyway. After the mysterious kiss and tight embrace, I felt so calm and relaxed like I'd never felt before.

A few weeks later, he came back just as I was about to fall asleep. This time he not only kissed me, he made love to me.

One thing led to another, and so I would welcome his visits. But I noticed he would only visit me when I was tired, stressed or needed calmness. Soon I could even communicate with him mentally.

Later, the amorphous fog or smoke began to take shape and became the solidity of a real man. I could now see his eyes and touch his body whenever I was in that very relaxed state you call the alpha level of the brain waves. We would make love or reunite with each other for a few seconds. I really liked and enjoyed those moments with my invisible lover. I figured he was my soul mate who'd come to visit me.

Then one time when he visited me again, he held or touched my neck. I felt he was choking me. I told him to let me go - and he did. But from that time on his visits, which previously were pleasurable for me, became a threat. I saw the sadness in his eyes when he left. After that incident he never visited me again.

I went to Japan to study (I'm from the Philippines) without any more incident. But then something happened.

I was about to fall asleep when I felt someone crawling on my bed. At first I did not pay attention to it because I knew I was alone in the room. Then I felt him lie down beside me. I felt him adjusting his position because my bed is for one person. I felt his heavy weight and I could hardly breathe.

He wanted to kiss me but I could not feel his kiss. I only saw a grey shapeless smoke without a face. I could not move my body. But I was still in control of my mind. I was on the verge of crying.

Then I prayed the Lord's Prayer and he started to fade until he was completely gone. It was only then that I could breathe and move my body again.

Now I am afraid the spirit may come back. When I tell my friends they don't believe me. They think I'm only imagining things because I have no boyfriend."