White Feathers Following The Loss Of a Loved One 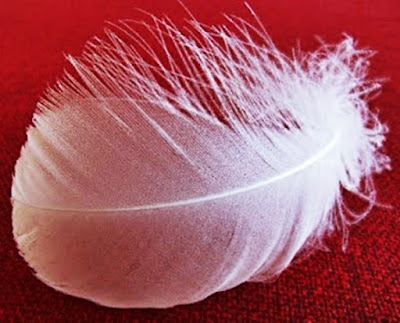 It's a while since I published any white feather stories so here are three I have received recently. These are experiences where white feathers are seen following a loved ones death.


Today would have been my mother's 97th birthday. Just before the family were leaving to go and put flowers on her grave a lovely wee white feather floated down among us - mum letting us know she was there.

I like the stories about the white feathers, possibly looking for comforting signs - but something proved it for me...

I was going for a big operation [surgery] and was a bit nervous of course. My mum had passed away two years before this. I was sitting waiting for the trolley to take me to the theatre when the orderly walked in then said, "I guess that's for you". On the empty chair beside me was a beautiful white feather. This was a closed room with no windows. I felt so good.

When I was recovering, following the operation, a nurse said you have a gift in your drawer. The orderly had put the feather in a plastic case and handed it to the ward ... a sure sign it was from a loved one.


My father, 94, passed in January. I found a white feather by my car door, I found one on a bush at my house and another on a shirt in a clothing store.

I bought a new car and there was one in the lobby. My cat is dying and I asked my dad to show a sign. I was sitting outside and looked up in the sky and a white feather was floating over my house in the wind. The white feathers appear when I really need my dad with me.


My mum passed away last night and a large white feather fluttered over the family as we were leaving the hospital. I'd never heard of this before but my sister knew and pointed it out. It's too much of a coincidence and seen by too many people not to be true ... I love you mum.

Okay they may not be the best white feather examples (though they are important to the people concerned) but over the years I have had a flood of such stores. It all started when I lost three very close people in a short period of time: my mother, daughter and my best friend of thirty years. After each of their deaths my wife and I started seeing white feathers wherever we went. If we started talking about one of them a feather would appear. I remember once going to visit our daughter's grave and a feather did a complete circle and landed where we were standing.

I know many will say this was all imagination or coincidence but it was meaningful and comforting to us at that difficult time. I wrote about this on my blog and it seems many, many others have had similar experiences.