White Feathers As Messages From the Deceased. 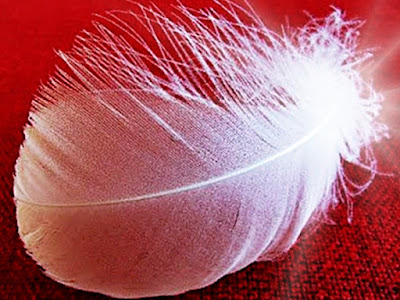 I haven't published any white feather stories for what seems an age, then these three arrived almost together. It's often said things come in threes! The stories relate to people finding white feathers following the death of a loved one.


My dad passed away suddenly on Easter Sunday 2016, then my mum had a heart attack the same day from shock.

My brother and I were at the hospital and then returned to their house It was was really weird neither of them being there, But their dog, Missy, kept looking where dad usually sat, staring,

We locked the main doors and I sat down, and my brother was near the fire, I said, "I wish dad would give us a sign," At that moment the door keys jangled, My brother looked and I looked and I smiled.

We didn't tell mum as we didn't want to worry her but today she rang up and said, "I found a white feather," I went, Okay ..." She was so happy and she explained it to me about white feathers. I went, "Wow," So I told her what happened with the door keys and that has given her great comfort

I cant believe dad has gone but there must be a better place where we go [after death].


My lovely husband passed away three weeks ago 14/3/2016. My house was cleaned through yesterday. Last night I went to get a coffee. And lying on the carpet was a large eight inch fluffy white feather, all the doors had been closed. It was placed so perfectly. He did tell me he would give me a sign that he was be OK.


Normally, I wouldn't be submitting these comments. but feel I have to share my experience with a white feather.

My wife passed away three weeks ago, losing her 2 year+ battle with cancer. She was at home wih us under hospice care, and shortly after she died I was in the room with her alone. I asked her if she would send me some kind of a sign to let me know she was OK.

Two days later I went into her room and in the middle of the bed was a single white dove feather. No one else had been in the room but me, so I have to believe it was my wife communicating with me.

Email ThisBlogThis!Share to TwitterShare to FacebookShare to Pinterest
Labels: Life After Death, Messages from the dead, White Feather, White Feathers