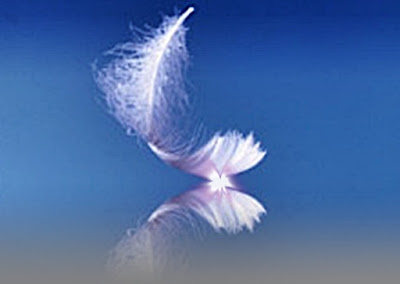 Two more white feather stories I received over the last few days - the author of one wishes to remain anonymous.


When my mother died, it was the worst moment of my life. I was in tatters and, as silly as it sounds, I couldn't believe that she had really died.

At the funeral I was in bits as we stood around mother's grave. As I looked down at the coffin a large white feather fluttered down and settled on some flowers, on top of the coffin. A good friend said, "Look your mother is thinking about you." I wasn't sure what she meant but somehow it was as if I had pulled myself together. I stopped crying and felt at peace.

Over the next few days I saw other white feathers and I believe they were from mother telling me she was alright and I should get on with my life.

A couple of weeks later, I saw a white feather while walking in the park, and picked it up. As I did so someone asked, "A message from a loved one?" It was a lovely looking man and, to cut the story short, we are now married. I believe my mother had a hand in this.


My stepfather passed away. He was cremated, and we had a church service for him.

In the limo on the way to the cemetery, my mother was seated in front of me and had her window opened. As we drove through the cemetery to his burial plot, a white feather came twirling down from the sky, through the opened limo window and landed right in my mother's lap.

My mother picked it up and threw it out the window as I gasped. I wasn't sure, and don't remember how I had heard about a feather being a sign from a loved one who had passed. I never said anything to anyone at the time because I wasn't sure.

If I told anyone now, they probably wouldn't believe me. So I just keep it between my stepfather and I. He must have wanted me to see it too.